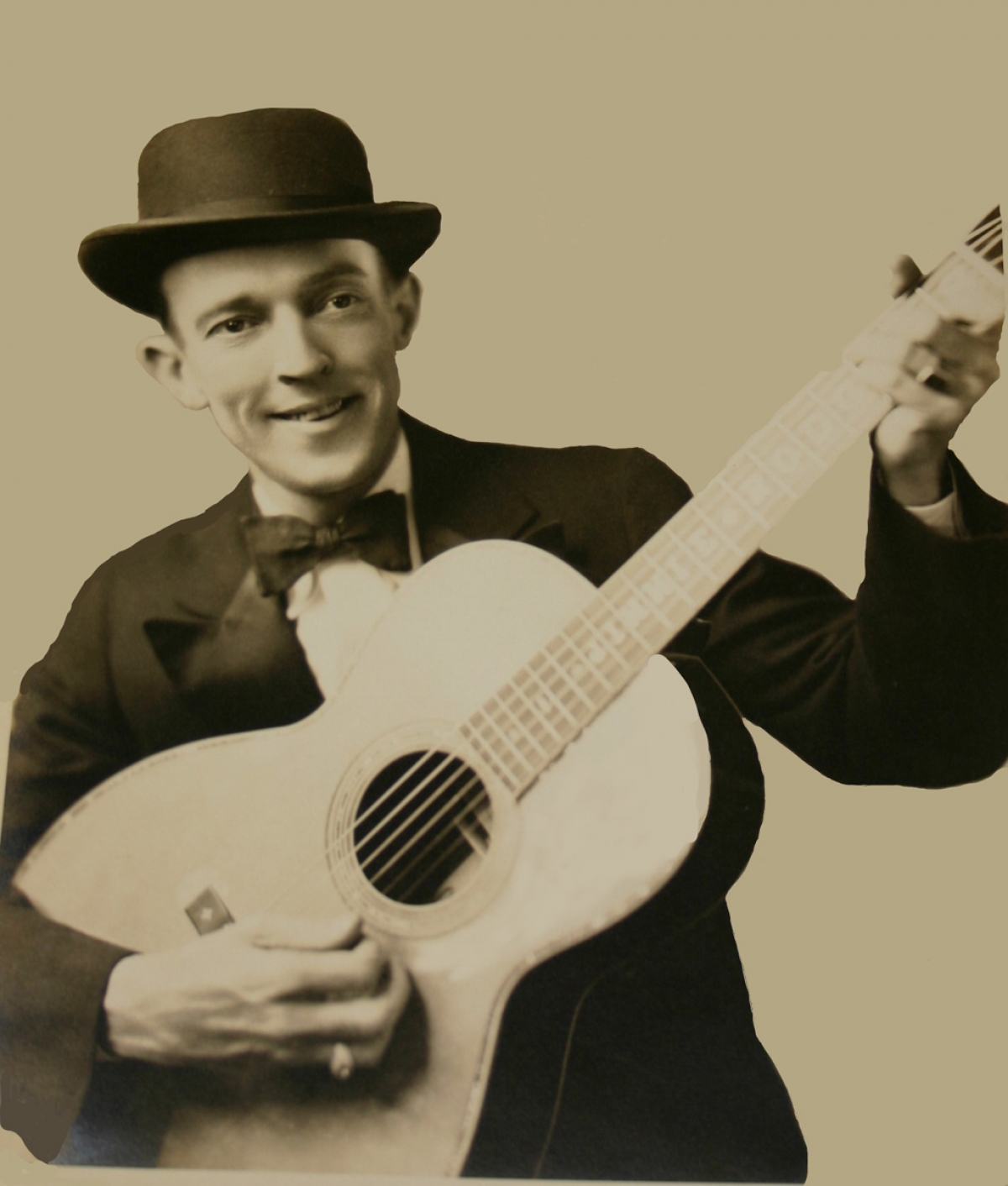 Jimmie Rodgers was born James Charles Rodgers on September 8, 1897 in Geiger, Alabama to Aaron W. Rodgers and Eliza Bozeman Rodgers. At age fourteen he began working on the railroad. Rodgers worked as a water boy, line and surfacing track, baggage handler and eventually a brakeman for the NO & NE. In April 1920 he married Carrie Williamson. They had two daughters, Carrie Anita, born in January 1921 and June Rebecca, born in June 1923. June Rebecca died a few months later in December 1923. Jimmie suffered with respiratory problems throughout his life. After surviving a major hemorrhage, he was diagnosed with tuberculosis in 1924.

Jimmie traveled a lot looking for work on the railroad and any opportunity to entertain, earning as much as he could to support his family. In January of 1927, Jimmie headed to Asheville, North Carolina, where his railroad friends helped him gain employment and a cottage so he could send for his family to join him. Jimmie fell in with the local musicians and was part of or started several bands, one of which was able to secure a weekly thirty-minute spot on the local radio station WWNC.

Word spread like wildfire among the musicians that Ralph Peer with Victor Records was holding auditions in Bristol, Tennessee looking for new recording artists. The Jimmie Rodgers Entertainers headed to audition. It was a long trip with each one praying the old sedan would not break down. They had to play for their supper and play to get gas, but finally made it to Bristol.

While Jimmie settled Carrie and Anita in a room above the bakers and conveniently across the street from the Victor man, his band made arrangements to audition on their own. The Tenneva Ramblers was a three-piece string band and divided by three was more than divided by four and they knew what they had to offer the Victor man, they explained. After learning the band had abandoned him, Jimmie was able to persuade Peer to let him audition on his own with only his guitar to accompany him. On August 4, 1927, Jimmie Rodgers recorded his first record, “The Soldier’s Sweetheart” and “Sleep Baby Sleep.” Jimmie’s next recordings were in Camden and his first “Blue Yodel” otherwise known as “T for Texas” was recorded with “Away Out on the Mountain” skyrocketing him to stardom. There were twelve more of his unique style of “Blue Yodels” to follow, on No. 9, he recorded with Louis Armstrong on horns and Loius’ wife, Lillian, on piano.

Rodger’s early works bore the influence of minstrel tunes, string music, blues and Victorian parlor songs and as his fame grew he cultivated dual images that permitted him to be “America’s Blue Yodeler” and “The Singing Brakeman” and a sharp-dressed dandy all at the same time. His music, profoundly shaped by sentimental temperament including facts from his own troubled life, proved him to be a lyricist of uncommon depth with confessional frankness.

Tributes to Rodgers are by Lefty Frizzell, Ernest Tubb, Hank Snow, Merle Haggard and Bob Dylan. Dylan wrote in his liner notes to “The Songs of Jimmie Rodgers-A Tribute” on his Egyptian Records Label. Rodgers “may very well be the man that started it all”.

Published in 2018
Tagged under
More in this category: J. E. Mainer »
back to top